Last April, Sonoma County’s supervisors banned commercial hemp cultivation, disappointing some agricultural producers in the county who hoped to establish a new, commercially viable crop. The story in Sonoma County changed in November, however, when the Planning Commission received an extensive report and proposed rules from County staff showing a way forward for a hemp cultivation program. On November 21, the Planning Commission approved the detailed plan setting forth the County’s approach to legal hemp cultivation. The new plan identifies which agricultural zones will permit hemp growing, along with rules for registration and permits.

The decision signals an end to a three-year moratorium on hemp growing in Sonoma County while governing officials have been considering how the non-intoxicating form of cannabis could be legally grown. THC cannabis growers also received good news at a recent Sonoma County Board of Supervisors meeting: on December 17, the Board voted to shift responsibility for cannabis farm approvals to its agriculture division. Although prospective hemp growers hoped to get the go-ahead at the same meeting, the Board agreed to make its final determination on Sonoma County hemp on January 6, 2020.

Can hemp farming in Sonoma County co-exist with wine? 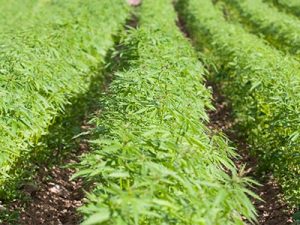 Europe may offer a picture of how wine and hemp could grow together trouble-free. Hemp is a remarkably versatile and helpful plant. Until the 2014 Farm Bill allowed universities and agricultural research facilities to plant industrial hemp, all hemp products in the U.S. were made from imported hemp which came primarily from Europe. The lovely, soft hemp fiber clothes in sustainable clothing boutiques, and also the hemp oil enriched skin and hair products we have enjoyed over the years, have all been produced from imported hemp. Hemp milk, which many enjoy for its nutty flavor and nutrition, is made from imported hemp. Even after the 2018 Farm Bill which permits legal hemp growing, most hemp-based products in the U.S. continue to be made from imported hemp, including CBD products.

It turns out that not only does Europe continue to grow a quarter of the world’s industrial hemp, 40% of this crop is grown in France. In France, hemp is used for far more purposes than here in the U.S., including construction — there is even a winery in Languedoc built primarily of lightweight, environmentally sustainable hemp bricks that absorb carbon dioxide from the air. Château Maris has been named one of the five most environmentally-friendly wineries in the world by Wine Spectator and is an EU-certified B-Corporation, indicating that it operates in harmony with the environment.

Hemp in Europe has been planted for hundreds of years, and free of intoxicating THC controversy has been able to remain a traditional crop. In addition to France, European hemp has peacefully co-existed with wine grapes in Italy and Spain for generations.

Will the Sonoma County hemp really look just like cannabis?

One concern Sonoma County officials have expressed is the difficulty in visually distinguishing cannabis from hemp. Staff reports to their Planning Commission, as well as state hemp Commission guidelines, indicate that the two plants can’t be distinguished from one another without lab testing.

Their concerns are understandable because individual leaves or flowers of hemp and cannabis are difficult to distinguish from each other when they’re put side to side in isolation. The similarities in leaves and flowers, once removed from the plant, have led to law enforcement authorities in other states seizing truckloads of cut hemp as illegal marijuana shipments.

But when planted, high density (1,000 to 2,500 plants per acre) fields of industrial hemp present a significantly different appearance from THC cannabis plantings. Commercial hemp comes in four varieties which growers could consider for planting as commercial crops in Sonoma County: oilseed, fiber, hybrid (oilseed and fiber – dual purpose), and cannabinoid/CBD hemp. Industrial hemp fields are usually significantly taller and are planted at a much higher density per-acre than cannabis grown for its high THC content. CBD is the main interest of most of the people who are interested in growing hemp in Sonoma County, of course. Sonoma County’s hemp regulations specify that industrial hemp must be identified by growers, to solve any confusion over whether a crop is hemp or THC-bearing cannabis.

Ironically, the growing of THC-bearing cannabis has been allowed in Sonoma County since 2017, but progress in approving permits is slow. As of July 2019, only 10 producers were operating in the county. Sonoma County is one of 32 California counties that have a process for THC cannabis growers to receive permits and licenses.

What could the outlook be for cannabis-related crops in Napa Valley?

In California’s wild, woolly new world of legal cannabis, both intoxicating and non-intoxicating, there are more opportunities for sustainable agriculture and plant-based health and beauty products than ever before, and this is why so many people are interested in growing hemp. Sonoma County’s approach to the issue differs from Napa County, which currently does not permit intoxicating cannabis growing or industrial hemp operations.

Napa Valley will certainly find its own relationship with hemp growing, but Sonoma County’s recent changes show promising ways for growers to introduce new crops and uses for hemp. However, none of these changes seem to be simple or easy. In September, Sonoma County’s Board of Supervisors approved a one-acre marijuana grow for Sonoma Hills Farm, which is located on Purvine Road in a rural area of west Petaluma. Opposed by neighbors for three years, the controversial grow operation will be able to start despite neighbors erecting “No Pot on Purvine” signs and filing lawsuits to prevent the farm from using a portion of its former chicken ranch for cannabis cultivation.

It is some distance from a former chicken ranch in Sonoma County to Napa Valley’s elite wine estates, but hemp farming in Sonoma County could have an impact on our lifestyles and property in Napa Valley. I find industrial hemp’s beneficial co-existence with French wineries fascinating, posing an intriguing and non-disruptive potential relationship of agricultural crops with environmentally-conscious and sustainable Sonoma vineyards and wineries.