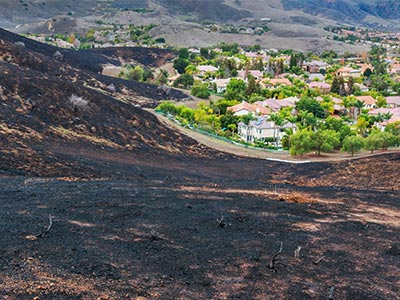 In the face of California’s growing wildfire danger, any property owner should be considering ways to protect their home from fire. Insurance companies have already responded to the increased risk of fire by dropping coverage for nearly 100,000 homeowners in the Bay Area’s nine counties. Between 2015 and 2018, over 2,500 Napa County homes have lost insurance coverage, and in Sonoma County, the number is more than 9,300.

As Pacific Gas & Electric has instituted lengthy power shut-downs that impact wine production, and the fire season seems to be starting earlier and lasting longer every year, Napa Valley property owners would be wise to investigate ways to reduce the risk of wildfire damage. Last October’s Kincade Fire tore through over 90,000 acres in Sonoma County, destroying Soda Rock Winery in Healdsburg and damaging three other Alexander Valley vineyards and wineries. No one in Napa Valley will forget the October 2017 fire season when the Tubbs, Nuns, and Atlas fires all destroyed thousands of properties and took the lives of more than 30 people.

I’ve become interested in fire resistant landscaping because it’s something that all property owners can do to protect their structures and land from fire. If we look at televised images of properties that were affected by the fires, we see that some structures survived unscathed while other structures nearby along with landscaping were blackened and burned to the ground. Fire resistant landscaping, also called “firescaping,” isn’t the only way these properties survived, but it’s an important contributing factor that we have come to learn.

What is Fire Resistant Landscape Design?

Tech comes into play to aid landscaping that can protect your property against fire. Aerial 3D mapping and modeling software help to identify fire risk areas on your property. As we already know from the devastating fire seasons of recent years, trees and plants that are stressed or dying as a result of climate change are the biggest risks in large, dangerous wildfires. Fire resistant landscape designers can use infrared technology to identify areas that have large numbers of dead or dying trees and other plants that need to be removed and replaced.

A fire resistant landscape uses the concept of “defensible space” to help reduce fire risk. The design focuses on establishing zones around structures, ranging from nearby spaces up to 30 feet away from buildings to larger zones of 100 feet to 150 feet providing lines of defense against fire encroachment. The idea is that fire can be slowed or stopped in outer zones while inner zones and structures remain untouched by fire.

How Have Some Napa Valley Wine Growers Responded to Fire Danger?

Will Jarvis of Jarvis Estate told Wine Spectator that “every winery in Napa is going to be on high alert for the next few years in terms of fire prevention.” Jarvis Estate has trimmed vegetation around the property and strategically placed sprinklers to aid in fire mitigation. The vineyards themselves are naturally fire-resistant. They don’t require the type of landscaping redesign that fire safe landscaping represents as compared to traditional landscaping around our Napa Valley estates.

Somerston Estate in the Vaca Mountains in eastern Napa Valley takes an approach to reducing fire risk that was pioneered in the Malibu area in Southern California decades ago. Malibu neighborhoods that have used this method survived recent fires that destroyed estates in hills and canyons that lacked this simple, time-honored fire mitigation technique: sheep. Somerston Estate has a herd of about 450 sheep which roam the property grazing and keeping brushy undergrowth down, significantly reducing fire risk.

Throughout Napa Valley, fire-wise landscape design is being used to create defensible space around properties. Statewide, California law requires that properties have 100 feet clear of flammable debris around the property, and that trees be spaced 100 feet apart in forested areas. Hilltop or ridge properties need 50 feet of clear area beyond the basic 100 feet. This helps to protect against wildfire’s tendency to move uphill.

We see a variety of water-wise landscapes throughout the Valley which can blend harmoniously with fire-wise landscaping. Grass can be replaced with fire-resistant or inorganic garden mulch, including pebbles, volcanic rock, and even shells. Hardscaping, including new walkways and retaining walls, also serve as distinctive landscaping features while also slowing the progress of fire.

Fire Resistant Landscape Design – Which Plants Are Flammable or Fire-Resistant?

The golden color of California’s rolling hills has resulted from the replacement of natural fire-resistant wildflowers and annual grass by flammable, non-native grasses. Fire experts even call these types of grasses “flashy,” which means they burn easily and can rapidly spread fire. They are almost like the first rung of a ladder that leads to the terrible conflagrations we saw in 2017 and last year. California’s native chaparral includes manzanita, ceonathus, and chamise, three plants that produce the typical backcountry mixture of low-lying shrubs and drought-resistant plants. This landscape depends on fire which consumes older, weaker plants allowing new growth to develop as soon as rain comes after a wildfire. However, the natural fires that rejuvenate the wild California landscape occur only once or twice in a hundred years. They aren’t the same as recent large wildfires occurring within two to three years of each other.

All plants can burn in the most severe wildfire conditions, but fire-resistant plants don’t accumulate many dead leaves, branches, or stems. They should also be free of flammable compounds, like resin, oil, or terpenes. Terpenes, I’ve learned, are the compounds which produce a “pine” odor — so pines are not fire resistant, because these compounds are highly flammable.

Fire-resistant trees include maple, poplar, and cherry. Shrubs that resist fire include hedging roses, bush honeysuckle, sumac, and shrub apples. One decorative and drought resistant imported plant that also resists fire is often seen around Napa Valley: French lavender. Native California plants that present an attractive appearance and resist fire include red monkeyflower, and California sage and lilac. It’s hard to forget the distinctive and pleasant odor of California sage in the evening, and lovely to know that it can also help to protect against fires. Succulents, which we see so often in our coastal and inland areas, are also fire resistant and include nearly every type of ice plant.

We’re all in the process of learning more about how we can protect our properties and homes against wildfires. I find this topic fascinating and am committed to learning more and sharing how beautiful and fire-resistant landscape design can not only protect against fire but also potentially use less water than traditional, fire-prone plantings imported from other regions.