Napa Valley’s vineyards could be a little safer from disease thanks to fantastic news from UC Davis’ grapevine researchers. Vine-killing Pierce’s disease (PD), which forced removal of many vines from Napa Valley’s vineyards in 2015, has been a real concern for viticulturists in recent years. But UC’s scientists have been successful on the breeding front, and project leader Dr. Andy Walker has announced the availability of five new PD resistant varieties, including three whites and two reds. Not only are the new varietals disease-resistant, tastings for wines made from Dr. Walker’s disease-resistant grapes have shown promising results in taste and disease resistance throughout their ongoing development, which began in the mid-2000s.

What is Pierce’s disease in grapes? 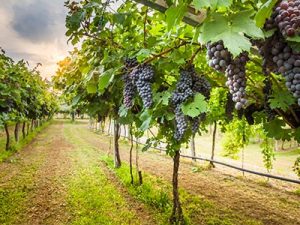 Pierce’s disease or PD is a fatal grapevine disease which has plagued California’s vintners for over a hundred years. It’s hard to imagine today’s Los Angeles basin as being grape-filled, but that was the case in the 1880s. The first onslaught of PD in California devastated Los Angeles’ 19th century vineyards and returned to wipe out any that remained in the 1930s and 1940s. If the disease hadn’t struck these southern vineyards, Los Angeles may have become a noted wine-producing region. Napa Valley’s vineyards were spared from the disease for decades, but Pierce’s disease took hold in 2015, forcing the destruction of up to half of the vines in some vineyards.

Pierce’s disease in grapes is caused by a bacterial infection that blocks grapevine xylem, the part of the vine that draws water and nutrients from the roots. Where normally xylem allows nutrients and water to flow freely, the bacterial infection turns it to gel. The gel chokes the vines, and leaves yellow and die as they are starved of water and nutrition. There’s no cure: the only solution is to pull up the infected vines and replant.

A Pierce’s disease-spreading insect with an unusual name

Xylella fastidiosa is the bacteria that causes this grape disease. Like many diseases, it’s spread by an insect vector. In California, the vector is an exotically-named bug, the Glassy-Winged Sharpshooter (GWSS). Although the current good news about the disease involves disease-resistant grapes, researchers have also focused on eliminating the GWSS, which spreads the disease. UC Davis along with other University of California campuses have been working for over a decade to find environmentally-friendly yet effective solutions to reducing GWSS populations and keeping them away from grapevines.

The GWSS isn’t a California native, it’s an invasive foreign pest that only showed up in the state in the late 1980s. While the insect can feed on some ornamental plants and crops without spreading disease, it is a significant pest on its own, in addition to spreading the PD bacteria. Like many other invasive insects, chemicals are no longer quite as effective on the GWSS as they were in the past. Napa Valley is in an “at risk” area for increased GWSS infestation, but it isn’t as heavily infested as southern counties, including Los Angeles, Orange, San Diego, and Ventura.

Taking a long-term approach of strengthening grapevines against the insect and bacterial infection, the UC Davis research team sought to breed disease-resistance into grapevines by crossing traditional wine grape varieties (Vitis vinifera) with disease-resistant American native grape varieties. If you’ve ever been exposed to wine made only from native American grape varieties like muscadines, you’ll know that the Vikings must have drunk a little wine if they called North America “Vinland.” Dr. Walker’s success arose from crossing the new varieties with Vitis arizonica, or Canyon grapes, a native wine grape from the Southwest. At about 3% vitis arizonica, the new grapes are resistant to PD, but also offer the taste and composition needed for fine wine grape varietals.

The five PD-resistant varieties which have been patented and will soon be available include:

Camminare Noir: which is 50% Petite Sirah and 25% Cabernet Sauvignon. It is highly PD-resistant. Tastings found that dark red Camminare Noir was an elegant, tannic wine with notes of raspberry, cherry, and other dark red fruit.

Ambulo Blanc: this white wine containing 62.5% Cabernet Sauvignon, 12.5% Chardonnay, and 12.5% Carignane, was field tested in other wine regions which have been harder-hit by PD than Napa Valley, including Temecula and Sonoma. It produces large clusters of small-to-medium berries and produces a light-straw colored wine with notes of citrus, lime, and tropical fruit.

Caminante Blanc: the final PD-resistant wine developed by Dr. Andy Walker at UC Davis has a similar composition to Ambulo Blanc, but is a late-blooming, mid-season variety. Its wines have rated highly in tastings, with floral aromas and a well-balanced flavor profile including apple-melon, pineapple, and lychee.

When will the PD-resistant grapevines be available?

UC Davis’ Office of Research Innovation Access filed patent applications for the grapevines on November 5, 2019. Once approval is received, the cultivars will be grown at CDFA-certified nurseries, which include Herrick Grapevines in St. Helena in Napa Valley. Out-of-state nurseries may also be able to grow the vines if they pay a one-time license fee of $250 and royalties of $1 per every grapevine sold. Some PD-resistant varietals have already been part of field trials in Napa Valley, Sonoma, Ojai, and Temecula.

Since Napa Valley was spared for years from a lot of PD infestation, in 2015 when some growers in the valley were hit by Pierce’s disease and forced to uproot half of their grapes, people saw climate change as a likely culprit. Both the insect that spreads the disease and the bacterial infection are warm-weather species. There is some evidence for this because the GWSS and infection appear to be moving farther north, especially since the initial stages of the infection in the 1990s.

Although the new grapevines that are resistant to PD are producing promising wines, the Glassy-Winged Sharpshooter and PD bacteria aren’t going to be easily eliminated. A combination of vector control and vegetation control can help to keep the GWSS away from vineyards. Even though Napa Valley hasn’t been as devastated by PD as some other California wine regions, owners are advised to be vigilant.

All sharpshooter insects can spread PD, but the GWSS can fly farther than most, so growers shouldn’t assume that streams and water sources are too far from their vineyards to warrant vector control measures. The bacteria can live year-round in wetlands, but it prefers non-native plants. Both the insect vector and the bacteria can be reduced by destroying non-native vegetation like giant reeds, ivy, tamarisk, and pampas grass. If you have a property with streams that may have significant amounts of non-native vegetation, clearing these areas and restoring them could cut down on risk to vines and our precious wines.

Breeding additional new varieties that are resistant to PD could be a path to the future, especially if climate warming will make Napa Valley a friendlier home to the GWSS and PD bacteria. If the tasting profiles of Dr. Walker’s new wines are any indication, UC Davis has made an incredible contribution to the future of Napa’s wineries and disease-free viticulture.