While driving along Highway 29, you may catch a glimpse of what appears to be a Silicon Valley campus. Sleek, stark, white buildings are accentuated with porthole windows and a zigzag roof. 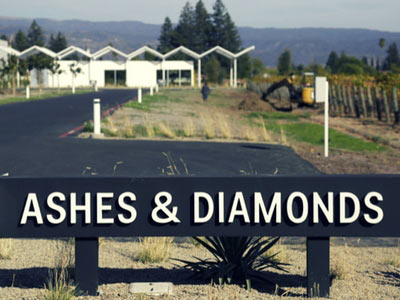 You may mistake it for the offices of an up-and-coming tech startup, but in reality, it’s Ashes and Diamonds Winery, one of the most intriguing new additions to Napa Valley.

Having just opened last fall, Ashes & Diamonds is the creation of Kashy Khaledi. If the name sounds familiar, it’s because he’s the son of Darioush Khaledi, the owner of Darioush Winery, which has been in Napa Valley since 1997. However, wine wasn’t always the younger Khaledi’s path. Before delving into the family business, he worked as a former executive for companies such as Live Nation, MTV, and Capitol Records.

Khaledi named the winery after a rather obscure Polish war film, which is fitting for a winery that is quite unconventional at its core – something that all of Napa Valley will most certainly welcome, as it seeks more ways to attract a younger crowd.

Khaledi first viewed the 1958 film Ashes and Diamonds several years ago while trying to get his creative juices flowing at Capitol Records. “As one tends to do in those situations, you take yourself out of the work and noodle into corners of inspiration,” he shares in an interview with Vogue. “Then I watched the movie and was emotionally pulverized.”

Shortly after getting a creative boost from the film, he decided to part ways with Capitol and immediately went to work planning and developing Ashes & Diamonds Winery.

From vinyl to vines

Much like the process of creating and putting together a chart-topping album, Khaledi meticulously brought together a stellar cast for his winery. He enlisted a few of Northern California’s top-rated winemakers, including Dan Petroski of Massican and Larkmead and Steve Matthiasson of Matthiasson Wines, winner of San Francisco Chronicle’s prestigious Winemaker of the Year award.

Though Khaledi grew his own fruit on the very grounds of his estate in the Oak Knoll district, he also collaborated with some of the top winegrowers, such as Bart and Daphne Araujo. In charge of his winery’s food program is chef Emma Sears, previously from Scribe Winery.

Khaledi’s ties to the music industry aren’t completely severed, however. He hired Brian Roettinger, the artist behind the album cover for Jay-Z’s Magna Carta Holy Grail, to design his labels.

Towards the top of the wine charts

While Ashes & Diamonds is still in its infancy, its wines have already been included in some of the best restaurants across the country, including LA’s Jon & Vinny’s and Spago, New York’s The Nomad, Cote, and The Modern at Moma, and San Francisco’s Nopa, State Bird Provisions, and Petit Crenn.

What separates Ashes & Diamonds is Khaledi’s vision to establish it as a cultural hub. The basic winery concept – take a look at the vineyards and taste the wines – is in place of course, but Ashes & Diamonds has winter workshops, talks with Napa icons, and collaborations in music, film, and food on the horizon as well, all of which are sure to attract a younger and more diverse crowd.