Does spending a weekend in Mars sound appealing to you? Then you will enjoy this CNN article I just read about the future of travel. Much like the business of real estate, the travel industry is changing at its most rapid pace ever. Technology has continued to evolve and consumers have transformed the way they talk about, search for, book and experience travel.

The article looks at the future of travel, including exploring the dream of being able to take a weekend jaunt to Mars. According to the article, when commercial space travel happens, it’ll likely start as the in-orbit kind currently being worked on by the likes of Virgin Galactic. People will pay huge amounts of money to travel in what’s essentially a really high-flying airplane.

Eventually this could progress to weekend stays in orbiting space stations, like space condos, said James Canton, head of the Institute for Global Futures. But interplanetary travel is unlikely to take hold since it’s just so expensive. 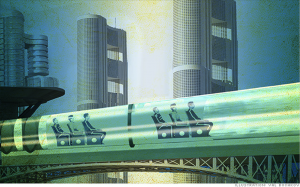 Then there’s the idea of traveling through tubes at speeds approaching the speed of sound. Last year, South Africa-born Canadian-American engineer, entrepreneur, and inventor Elon Musk practically broke the internet when he unveiled his “hyperloop” concept. Basically, it’s an elevated tube carrying people from San Francisco to Los Angeles in under 30 minutes for a fraction of the cost of high speed rail.

Musk’s idea is one of many involving people traveling in tubes; some vacuum sealed, some crossing the ocean, some reaching 4,000 miles per hour. They sound like pure science fiction. But futurists are surprisingly upbeat on the idea.

To find out when you might be able to book a weekend in Mars and other exciting travel possibilities in the future, read the full CNN Money article about the topic. Meantime, if your immediate future includes selling or buying a luxury home, estate, vineyard or winery in Napa Valley or Sonoma Valley, please call me at 707-738-4820 or email me at [email protected].