An exciting second quarter report recently compiled by Sotheby’s International Realty Wine Country’s Broker, Jeffrey Gibson, revealed that as we reach the second half of 2014, market growth in wine country is the most powerful we’ve seen in years.

Per the Bay Area Real Estate Information Service, overall sales of single-family homes in wine country priced above $500k experienced significant increases. While each area did see an increase; St. Helena lead the pack with a 64% increase in sales volume in 2014 in comparison to the second quarter of 2013. 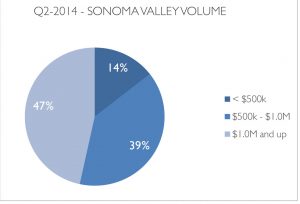 Take a look at more in-depth details of this market report by clicking here. You’ll see that one of my Healdsburg listings is featured! Continue following my blog for continuous wine country market updates. We’ll make sure to publish a Q3 update as it becomes available.