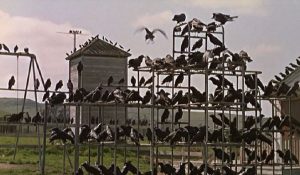 The scenic beauty of Northern CA, has been featured in films for decades, with Alfred Hitchcock’s “The Birds” coming to mind as one of the first I can recall.  Who can visit the coastal towns of Bodega Bay and Valley Ford, after having seen that film, without questioning what that flock of seagulls is up to?  From Old Tides Wharf Restaurant (now the Tides in Bodega Bay) overlooking the historic fishing area, to Potter School and St. Theresa’s Church (which is inland, in the actual town of Bodega), there’s much of the quaint town has remained unchanged. 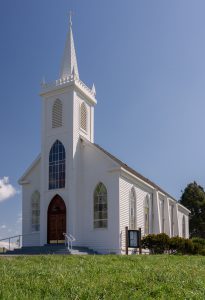 A few decades later, Francis Ford Coppola’s filming team came to the town of Napa and actually recruited extras for some of the war scenes, at the Napa Valley College. It was on the muddy river bank of the Napa River that many scenes for “Apocalypse Now” were filmed. To date, the famed producer keeps his vast collection of movie memorabilia at Francis Ford Coppola Winery in Sonoma County. While visiting that winery or dining at Rustic, Francis’ Favorites,  the adjoining restaurant, guests can view Don Corleone’s desk from “The Godfather,” the original car used in “Tucker: The Man and His Dream,” and amazing costumes from “Bram Stoker’s Dracula”. Of course no movie collection would be complete without a few shiny Oscars too!

Both Napa & Sonoma Valleys were featured in the 2008 film “Bottle Shock,” which goes back in time to 1976, when our simple little Northern CA wine region was awarded first price in the historic “Judgment of Paris” blind tasting. The film told the partial story of the new world’s first Chardonnay that won global attention, in France, none the less.  The wine made by Miljenko Grgich, who at that time was winemaker at 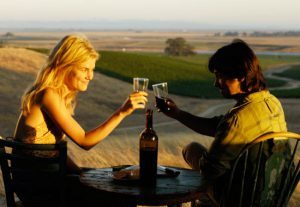 Chateau Montelena, boasted coastal Chardonnay fruit from the Russian River Valley in Sonoma County.  Visitors can take a “Bottle Behind the Scenes Tour” at Chateau Montelena, while tasting wine and discussing movie facts. There’s also a special mountain top tasting offered at Kunde Family Winery in Sonoma Valley’s Kenwood. While up there you can view the fighting rink from the memorable father/son boxing match.

While on your cinematic vacation in Napa Valley, check out Staglin Family Vineyard in Rutherford, where portions of “The Parent Trap” were filmed. Beringer Vineyards and Duckhorn Vineyards, in St. Helena, were featured in “A Walk in the Clouds”.

Living in this area is truly so lovely you might have to pinch yourself to make sure you’re not dreaming, or starring in a movie!