You might recall that I introduced Executive Global magazine to you last year. It’s an online and print magazine based in London on News and Opinion from the most Reputable Sources from Around the World, and gives a highly informative and insightful look at the developments shaping our global economy.

The 2016 Spring issue featured David Morgan on the historical relationship between gold and silver; Michael Siebold on profitability, M & A and corporate restructuring and John Williams on how a recession may help to restore balance.

In the newly released 2016 Summer issue, Stegan Kremeth talks about Britain’s post-Brexit relationship with the EU; John Williams talks about renewed QE attempts by the US Federal Reserve; Harry Dent looks at US equity and bond markets; and I talk about strategy and luxury estates.

For me, the interview was like taking a trip down memory lane, as I recalled the many chapters of my professional life, from being a paralegal in a law firm in Sydney, Australia specializing in real estate transactions, to being an anchor on Sydney’s first cable network and eventually, with a few chapters in between, runni 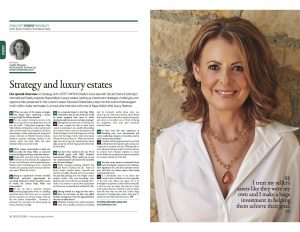 ng my own luxury real estate marketing company with projects throughout Australasia.

In the back of my mind I had always thought that I had randomly leap frogged from one passion to another every 7 years.  With each chapter came a new learning curve, many challenges, opportunities and a dream of
excelling at whatever I had decided was my new passion.

In looking back at all the chapters of my life in the interview, I had an epiphany…….. each and every chapter had a real estate, communications, staging, video production and/or lifestyle component.  Today, in my boutique real estate practice, I draw on the many skills I learned along the way, which has greatly contributed to the coveted clientele that I am so privileged to work with.  So only now is it abundantly clear to me, that there were no random moves from one passion to another – it was the universe that orchestrated the symphony of my blessed life.

As Decker Bullock Sothebys International Realty’s top producing agent in Napa Valley, I have access to some extraordinary wineries, vineyards, estates and vacation homes that are not on the open market.  You can reach me at (707) 738 4820 or [email protected]  I have loads of intel on private sales.

Now you know how I keep abreast of the global economy, I invite you to subscribe to Executive Global magazine.  You won’t be disappointed.