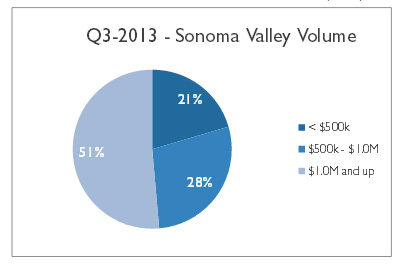 Jeffrey Gibson, Managing Broker of Wine Country and San Francisco brokerages invites you to review Sotheby’s International Realty’s quarterly residential wine country real estate Market Update. Data was pulled from Bareis Multiple Listing Service. Keep in mind that the data does not include off market sales. Prices of homes selling for more than $1m in Saint Helena saw a 19% decline from the third quarter of 2012, while Sonoma Valley is showing a 17% increase over the same period. However there were several quiet high end sales in Saint Helena in Q3. Click here to review the report.

In addition to the report, I pulled the market stats for the last 3 years. These reports were also generated from the Multiple Listing Service for properties starting at a $1,000,000. They do not include quiet or confidential sales. They show comparisons between: