The California solar panel law for all new residential homes took effect January 1, 2020, and I think it’s likely the panels will continue to be required for the foreseeable future, although recent challenges from utility companies outside Napa Valley are looking to get around the mandate. As always in our Golden State, the situation is complex and I’ve got some background and updates in the drive for clean solar energy.

In December 2018, the solar mandate was fully approved and set to begin on January 1, 2020. Despite some protests that it would add to home building costs in California’s already-stressed entry-level housing market, the bill is now in effect. The mandate is an important part of the Energy Commission’s goal of having at least 50% of California’s energy coming from clean sources by 2030.

What is included in the California solar mandate? 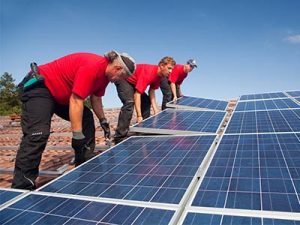 The California solar mandate doesn’t say that all newly-built homes of any type have to have solar panels. It applies to low-rise construction, defined as new single or multi-family homes up to three stories in height. Some new construction will be exempt, including homes with rooms that are too small for a solar installation or those built in a heavily shaded area, unsuitable for rooftop solar.

The idea behind the mandate is simple: instead of adding construction that relies on unsustainable power in California’s aging non-renewable energy grid, new construction will automatically be sustainable and reduce the need for fossil-fuel generated power. We already know the impact of California’s aging electrical grid infrastructure on fires, and mandating that all new residential construction must use solar power provides some relief for that overburdened system.

The open-ended nature of “community solar power” and lack of an exact definition from the Energy Commission has led to challenges. Somewhat ironically, the first challenge came from the state’s capital, where the mandate originated. Last year, the Sacramento Municipal Utility District (SMUD) appealed the mandate to the California Energy Commission, asking that home builders in the capital region be allowed to build new homes without rooftop solar panels.

To justify the construction of new homes without rooftop solar systems, SMUD asked the commission if they could use solar credits with other, currently-operating projects, including a large solar farm in Fresno County, far from the planned Sacramento housing developments.

SMUD’s request essentially turned the intent of California’s solar mandate on its head by diverting existing clean energy or already-planned projects from other areas to the Sacramento region. Although the Commission didn’t completely define “community solar power,” the intent was certainly not to allow new home builders to buy their way into already operating solar projects without adding to California’s clean energy capacity. This is the likely reason that the Energy Commission declined the request unanimously in November.

Another drawback to the Sacramento utility’s plan to get around the solar mandate was the lack of storage for newly built homes under their proposal. The full state solar mandate doesn’t just include rooftop solar panels. It also includes incentives to add solar batteries to new home construction.

Looking at reports about the mandate over time, I’ve seen some widely varying figures in average cost for adding rooftop solar power to new homes, with many estimates ranging from $8,000 to $18,000. The official figures from the California Energy Commission are $9,500 in added new home prices, with energy savings of $19,000 over the lifetime of the system.

Solar batteries play a key role in genuine clean energy and independence from the power grid, because they not only provide power on shaded days and at night, they enable systems to continue operating when grid power isn’t available.

Tesla Powerwall is one of the options available through the battery storage incentives which are part of the new construction solar mandate in California. I discussed the exciting clean energy potential for the Powerwall last September.

What impact do I envision the California solar panel law having in Napa Valley?

Many of the mandate’s provisions apply to California’s major public utilities, and in Napa Valley, the provider is PG & E. Napa Valley has benefited from 100% renewable energy provision from Marin Clean Energy since 2014 when Napa County chose MCE as its official clean energy supplier.

As early as 2016, over 92% of Napa County residences and businesses were using MCE’s clean power, derived from solar and wind. Average monthly power bills for MCE’s Light Green power consisting of 61% renewable sources, are now less than bills from PG & E’s “traditional” 39% renewable sources. There’s absolutely no financial reason to go with PG & E in Napa County instead of MCE, and new construction could instantly meet the solar mandate’s requirements by selecting MCE’s Local Solar option. MCE’s “Deep Green” power option, which is increasingly popular in Napa County, costs about $5 a month more on average than “Light Green,” which on its own, has already exceeded the state’s goal for 50% renewable clean energy by 2030.

Napa Valley new construction is far ahead of other communities

Thinking about the Sacramento utility’s request to take clean solar power from other regions to build tracts of new homes, it’s quite a relief to know there are so many options for clean energy in Napa Valley. With many of our wineries leading the way in MCE’s fully-sustainable clean energy, willing to pay slightly more in monthly costs to receive environmental benefits — the hope that MCE started within 2010 is now a reality. It seems the rest of the state may be playing “catch up,” but clean energy is here in Napa Valley to stay and the mandate will impact other areas far more than our estate properties.