Life in sunny California has always been seen, and sold, as an idyllic place where dreams come true. But that dream comes with a price – one that many residents are increasingly unwilling to pay. As California property tax rates hold steady, changes to the federal tax code’s treatment of property taxes are driving a migration of wealthy residents to lower-cost states like Nevada, Arizona, Texas, and others. Some are going so far as heading overseas to avoid the cost.

Conservative economists predicted a mass exodus of wealth from both New York and California following the passage of the federal Tax Cuts and Jobs Act, signed into law last year by President Trump. While the numbers predicted have yet to materialize, there is no doubt that the tax law’s limits on property tax deductions (only $10,000 for property, state, and local taxes combined) is pushing some wealthy homeowners to leave California for more affordable states.

Approximately one million taxpayers saw their tax bill go up after the passage of the Tax Cuts and Jobs Act, especially in states with higher overall taxes. Many pundits looking at the exodus of residents from California to states with lower overall costs of living lay much of the blame for California’s affordability problem at the feet of lawmakers and tax authorities in the state.

When comparing California to other states with a preponderance of high-net worth residents and higher-than-average home values, California begins to look like a bargain. New York (1.23%) and Massachusetts (1.04%), both known for their high housing prices, charge considerably more in property tax than California. On the west coast, Oregon (.87%) and Washington (.92%) also outpace California property taxes. 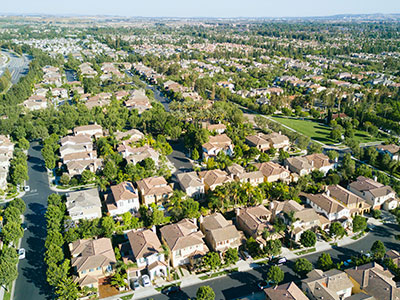 High cost of living brought on primarily through the high cost of housing has always been a reality for California residents, exacerbated by the new, higher taxes. In markets throughout the Bay Area, Los Angeles, and other highly desirable areas experiencing huge growth in industry, housing demand has outstripped supply for decades, create a seemingly insurmountable housing deficit.

Indeed, housing affordability has become a challenge for municipal and state authorities throughout the country. Driven by labor shortages, an emphasis on luxury homes and neighborhoods, and shifts in market centers from suburban to urban and exurban areas, the construction and residential development industry has struggled to keep up with demand, especially in areas with large and diverse populations.

Add to these baseline challenges the amount of demand placed on California residential markets by the growth of tech, entertainment, and hospitality industries based in the state and it was almost inevitable that a market correction, in the form of outward migration, would occur. Much of this has been centered on lower income residents and retirees on a fixed income who are more concerned with cost of living than amenities and job prospects.

Buying power in neighboring states with less desirable real estate markets is, no doubt, higher, but wages are lower, infrastructure is less developed and more expensive, and the job market is far less robust. For many of the higher earning professionals who make up the bulk of the real estate market in California, there’s simply no other place to be.

Affordable Housing Initiatives on the Horizon

For many mayors and governors in high demand areas, creativity is essential in meeting the affordable housing crisis in their markets. Development incentives, affordable housing ratio requirements, and other solutions are increasing the number of affordable units available to lower income residents and preventing some of the outbound traffic.

In September 2017, a 15-bill legislative package was approved that was designed to help control costs, ease regulatory hurdles, and circumvent delays that result in higher housing costs and lower affordability. The package will also help encourage the development of mixed-use and transit-oriented areas, cutting commute times and reducing road congestion while improving air quality.

After sweeping wins in the midterm elections on issues of housing affordability and development, newly elected Governor, Gavin Newsom, called for a “Marshall Plan for affordable housing.” This new emphasis on meeting the growing needs of residents eager to be part of the extraordinary California lifestyle promises to create new opportunities and make the state, once again, a mecca to the dreamers and creative types who make living here so exciting.

Find Your Piece of the California Dream in the Napa Valley

If you’re dreaming of the beauty, energy, sights, sounds, and flavors of this beautiful region, you’ve come to the right place. With a network of connections and second-to-none market expertise, I have the resources you need to find the luxury Napa Valley real estate, vineyard, or winery, of your dreams. Whether you’re a California native looking for a bit more space or from out of state looking for a second home to share in the exceptional lifestyle we enjoy here, contact me any time I’m here to help.