We’ve all heard of 5G technology, set to replace 4G technology because of its blinding speed for internet access, but how does it work? If you live in parts of Los Angeles or Sacramento, you may even be able to get internet in your home using 5G networks. Most of us aren’t sure how this technology works, or if it’s safe. Last November, the city of Napa approved Verizon’s request to add 28 5G cellular transmitters. Most of them will make existing cell towers taller, but a few new ones have been permitted. They’ll begin service in August 2020.

Judging by the images provided by Verizon to the Napa City Council, the new towers won’t be much taller or look very different from current ones. Although many of us are excited about 5G data service, others have understandable concerns about the safety of 5G technology. 5G and existing cell phone towers transmit radio waves, and this name alone should give us a sign of what these waves really are: radiation of electromagnetic energy.

What is 5G technology?

The “G” in 5G (or 4G, its predecessor) stands for “generation.” The new 5G technology being installed by Verizon and other communication companies is the latest version of existing cell phone technology that works through radio frequencies (RF). Radio waves are transmitted all around us by natural and human sources. They’re the lowest frequency of the electromagnetic spectrum. But they’re also a very broad band of the spectrum, which is why you hear the term “broadband.” The radio band ranges from as high as 100 GHz (very fast) to as low as 3 Khz (slow).

The first cellular technology, 1G, began in the 80s, operating at frequencies of between 850 MHz and 1900 MHz. MHz (megahertz) equals 1 million wave oscillations per second. 1G was an analog technology, and it only supported text messaging, pagers and basic cell phone service. When 2G arrived, it introduced digital communications. Analog tech broadcasts frequencies of different amplitude, while digital tech puts every type of signal into binary code of either zero or one. Cell phone towers transmit these zeroes and ones continuously. As the tech improved, 3G improved communication speed, leading to the current 4G technology.

5G tech will have about 40 times the capacity to carry information than current 4G networks. New 5G networks are going to transmit information in a much broader bandwidth of the radio spectrum than previous networks.

To provide coverage for customers, 5G will use the current LTE frequency range of 600 MHz to 6 GHz (gigahertz) along with higher frequencies. 5G transmissions will extend into millimeter wave length bands at 24 to 86 GHz. The broader range of frequencies enables the data to be transmitted much faster, and it also requires new transmitters. The FCC gave the go-ahead to communication companies like Verizon to use a new, previously unused band of radio transmissions — also called a “high-band” spectrum. Both “broadband” and “high-band” can be used to describe 5G transmissions. The ultimate meaning? Much more information, much higher speed, and many new ways we’ll be able to use our mobile devices and home internet.

What uses will the new 5G networks have?

In addition to enabling mobile phone users to access the internet more quickly and to support home use as an alternative to WiFi, 5G networks have been widely touted as being a game-changer for the Internet of Things (IoT). There are so many terms involved in this industry that it’s easy to become overwhelmed. The IoT refers to devices that are connected to the internet via wireless transmissions. IoT devices don’t require direct human intervention. One example might be a “smart” refrigerator which can order food. Amazon’s Alexa or Google Home are devices that support IoT. “Wearables” like the Fitbit or Apple Watch are other IoT devices. Most of our cars fit into the IoT, because their onboard computers transmit information about the car’s performance and need for service via telematics. Telematics is simply the auto industry’s name for transmissions made through the cell phone network to your manufacturer.

The IoT is playing more of a role in home ownership and real estate every day, as lighting systems, home security, and electricity and heating/cooling systems are connected to our smartphones and to the internet. Those in the know about the industry predict that between 20 and 30 billion devices will be connected to the internet by the end of 2020. This large number of devices sounds almost impossible, but people in the U.S. already have an average of 8 internet-connected devices, and the number is anticipated to triple by 2025 after 5G becomes widely adopted.

Thinking more broadly, internet-connectivity from 5G will revolutionize many additional aspects of life. Our communities are becoming smarter just as our homes and cars are. Have you heard the term “smart city”? It refers to a community that improves its services and environment by using information and internet connectivity. Remote sensors, some of which may even be so tiny they’re invisible to the naked eye, have already been developed that can help in waste management, environmental controls, and transportation systems. The potential uses of these connected devices in healthcare are truly revolutionary. Smart sensors in hospitals are already helping to prevent falls and provide more timely care by wirelessly monitoring patient vital signs and activity. No more pressing the call button and waiting for help!

I was amazed to learn that some of these internet-connected devices are already in use in some vineyards. What’s an “eVineyard”? It’s one with monitoring sensors that collect information on the vineyard’s micro-climate, soil data, and vine and grape health and growth. The data can improve irrigation, plant health, and help to control pests and disease. Also called AGtech, this new method of precision farming can be used from soil to cellar; some sensors and technology are already in use for controlling light, temperature, and humidity in wine cellars. It seems clear that 5G capabilities will only improve and refine their capabilities.

Which areas in California have 5G networks right now?

The City of Napa expects that Verizon’s 28 5G towers will begin operating in August 2020 or later. In the rest of the state, portions of Sacramento and Los Angeles have 5G capability in selected homes and neighborhoods. 5G tech has been touted for a number of years, with 2019 expected to be the “Year of 5G,” but towers are still in the permitting process, and 5G phones have been released more slowly than anticipated.

What are safety concerns with 5G technology? 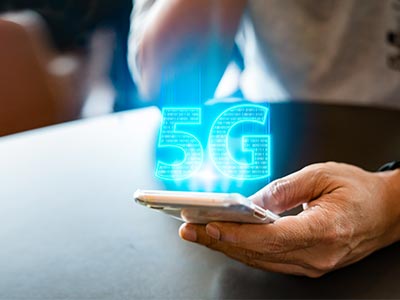 5G networks are currently being designed to support both 4G and 5G technology. The radio waves used for 4G communications are a form of microwave, and before we believe that such waves are safe in all regards, we should remember what microwaves do to water and food inside a microwave oven. 5G waves begin at much higher frequencies and use both submillimeter and millimeter waves.

Millimeter waves have been used by the U.S. military as weapons for a number of years. Active Denial Systems consist of a millimeter wave transmitter that can focus wave beams on crowds to encourage them to disperse. The focused beam penetrates the top layer of the skin, causing people to feel like their body is on fire. The wave frequency for the Active Denial System is 96 GHz, the same as the upper range allowed by the FCC for 5G networks.

There is also some overlap between the 5G frequencies and other military weapons called High Powered Microwave (HPM) weapons. HPM weapons go beyond radio frequency jamming to sending a powerful pulse that can disrupt plane and vehicle operation. HPM weapons are being developed by the UK and U.S. military as a defense against small drones.

All forms of radiation can have some health and safety risk, but currently, we know the most about health risks related to ionizing radiation, which includes X-rays and ultraviolet (UV) rays from the sun. Ionizing radiation are higher-frequency radiation. The higher the frequency, the higher the amount of energy that is transmitted, leading to a greater health risk in humans and animals. Radio waves are generally considered lower-frequency, but the 5G transmissions are moving into a higher frequency than any that have been permitted before.

Ionizing radiation as found in X-rays is known to increase the risk of cancer. The National Cancer Institute reports that the only confirmed risk of radiofrequency radiation is heating, as seen in microwave ovens and military weapons.

Several studies have been conducted, especially in Europe, to learn whether there’s an increased risk of cancer with cell phone use. Even though hundreds of thousands of cell phone users have been studied over time, there’s no confirmed connection between cell phone use and cancer. There are some study results in both the U.S. and Europe where brain tumors including gliomas, have occurred more frequently in heavy, long-term cell phone users.

An association of 250 scientists signed an International EMF Scientist Appeal, asking the FCC to provide stricter limits for 5G technology exposure. The scientists have pointed out that most of the studies used by the FCC to determine safe limits and how 5G will be allowed, were conducted during the 1980s. Over 500 additional studies on animals and humans, they say, show there are health impacts from non-ionizing radiation like 5G transmissions.

The scientists said that even low levels of the type of radiation used in 5G technology has some association with cellular stress, increased free radicals (contributing to aging), genetic damage, changes to the reproductive system, neurological disorders, and learning and memory deficits. Non-ionizing radiation as seen with 5G tech, can also harm other animals and plant life, according to the EMF scientists who signed the international health appeal.

What are some sensible steps to take safety with 5G technology and cell phones?

Since confined in a microwave oven, similar types of waves can cook eggs or boil water, it seems sensible to take reasonable cell phone and wireless safety precautions which include:

We don’t know all the impacts that 5G networks will have upon our health and our communities. 5G networks will require an increased number of transmitters that may be placed closer together. Verizon has requested a total of 50 5G transmitting towers from the City of Napa. Verizon installed a large “macro” cell phone tower at Napa High School which is very noticeable from the school’s athletic field. Common sense says that we can balance our need for smooth communications and continuing improvements in our home and work technology like “smart” appliances and cars with our own health and safety. We ought to be able to continue to use our cell phones and access the internet while preserving our health and the health of our community as well. I’ll be keeping up with 5G networks as they enter Napa Valley and plan to continue to inform myself and you about 5G technology.